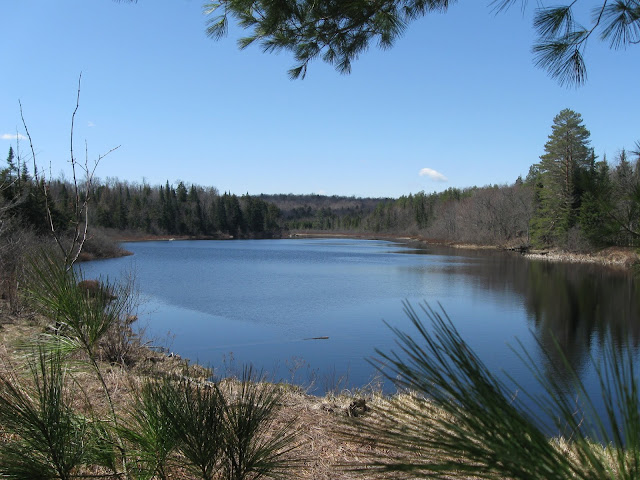 In an effort to “FLATTEN THE CURVE” Otto’s Abode will remain temporarily closed until further notice. This is our seventh week of being closed. 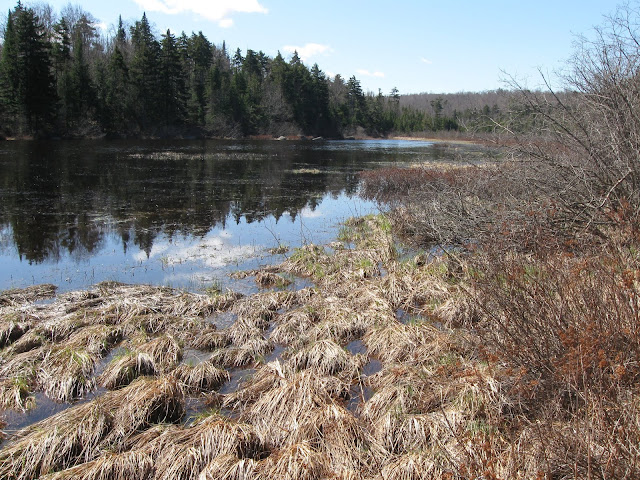 Weather In a nutshell: This past weekend was gorgeous! Sunny and 60 on Saturday. Had some rain/snow Monday, in the 40s. Tuesday was nice and Wednesday got really windy!!! Got bit by a mosquito over the weekend. Oh, and Turkeys! Turkeys are out gobbling around. Looks like we’re in for a soggy rest of the week. Though, could see some more sun and warm weather Saturday into Sunday. It’s been what some might call “unseasonably cold” over the last couple weeks. Could be why the grass along-side the ponds, streams, etc... seems to be growing so slow. Either way –  it's still growin’! 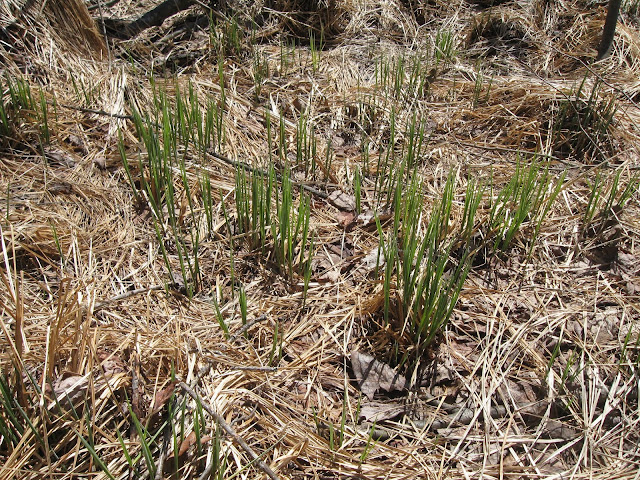 The beavers are back at it! This is the third year in a row the trail from Wanakena to Dead Creek Flow has gone under water. Waaayy under for a loooonng stretch of trail. Heading out from Wanakena the re-route is to your right and goes up a steep hill and around the pond re-joining the Dead Creek Trail just before you reach what was once a creek. The trail is well trodden from two seasons-work of foot traffic. Interestingly enough, on a old railroad map of the Rich Lumber Company Operation shows the re-route follows a portion of the "Cucumber Creek Spur". And everyone knows Cucumber Creek leads to Cucumber Hole, right? You might notice the "corduroy" trail beneath your feet as you walk the re-route - that's the old rail ties rotting into the duff. 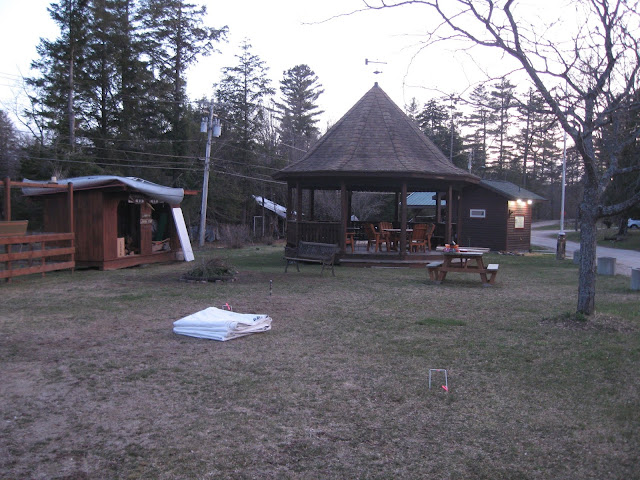 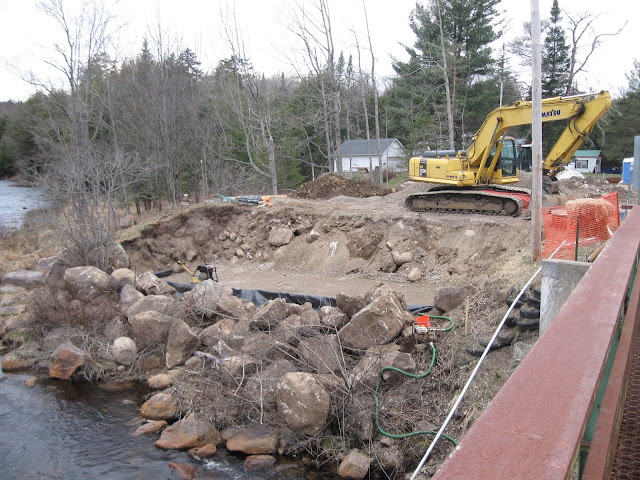 Work continues on the temporary south shore peer. Rebar forms are built and filled and packed with gravel. G-g-g-going up!! The roadway leading up to it was once sloped down toward the river, but now that footing is built-up it's almost flush with the actual road along-side it. Work work work! We’ll be driving across that temporary bridge in no time! 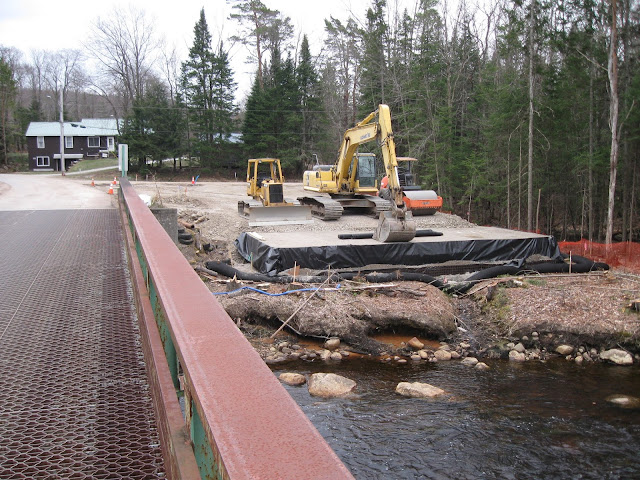 Here’s an excerpt from Wanakena Weekly #4 (end of February):
Depending on what time Wanakeners wake up in the morning their alarm may have sounded a bit different this week. Instead of an excruciating alarm clock going “MEEH MEEH MEHH MEHH” or their cell phones going “PING PING PING PING” or the Wanakena rooster going “COCK A DOODLE DOO” they most likely – depending on where they live within the village – heard “SCRAAAAAPE BEEP BEEP BEEP VROOM VROOM VROOM SCRAAAAPE BEEP BEEP BEEP VROOM VROOM VROOM”. This was the sound of the Town of Fine plow crew cleaning up the MASSIVE snow mounds alongside the roads and dumping it into a huge pile on River Street. THANKS, TOWN OF FINE!
Fast forward a couple months. We’ve had rain, we’ve had warm, spring is here…. But the pile remains! Need some snow? Now you know where to find it – camouflaged as a sand pile. Have a look-see:

An older news story that has just been brought to our attention: TROUT WILL NOT BE STOCKED IN CRANBERRY LAKE THIS YEAR. As the story goes, the DEC fish hatchery in Rome, NY had discovered that it had become infested with Zebra Muscles (oh no!) and therefore trout from that hatchery will not being going to waters where the invasive Zebra Mussel does not exits – that includes Cranberry Lake and most likley (hopefully) up at the Moore Trail/Oswegatchie. Story here: https://www.newyorkupstate.com/outdoors/2020/03/dec-18-upstate-ny-streams-wont-get-stocked-with-brook-trout-this-spring.html

And here’s a new local story pertaining to the Covid-19 crisis via Channel 7 News: https://www.wwnytv.com/2020/04/26/north-country-man-andy-hooper-opens-up-about-his-covid-recovery/
If you tried to click the link and it didn’t work – you’re not alone. It appears the story – which originally aired on WWNY TV channel 7 this past week - has been removed from the internet. The story described a man from Natural Bridge who tested positive for covid-19 elsewhere but had been relocated to and recovering at Clifton Fine Hospital in Star Lake. Maybe the story was some sort of breech in privacy? Hmm… Well, it was news. 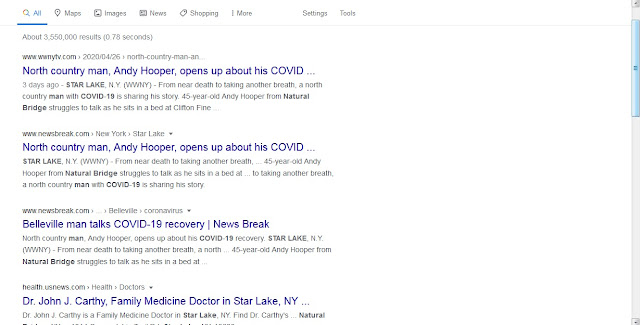 Blackwaters Café in Wanakena, UB’s Mercantile in Oswegatchie, Adirondack Pharmacy and Circle K in Star Lake, Mountain Gate Redemption near Benson Mines and Stone Manor Diner in Cranberry Lake and Sevey Point remain open for business in one way or another (open, take out, pick up, drop off, etc…).

Hillside Diner in Oswegatchie, Todd Hardware, Twin Lakes and Coffee Fever in Star Lake and Otto’s Abode in Wanakena remain temporarily closed. There’s a rumor going around that Lakeside General in Cranberry Lake wont be open this summer at all. Clifron Fine Central School remains closed. BUT, if you were around town this past Friday afternoon you would have heard LOTS of car horn honking, lots of "woohoo"ing, and cars decorated with signs celebrating class of 2020. The teachers were out and about on a parade though Clifton-Fine, students curbside waving and dodging hard candy being tossed at them.

Kim’s Lost Dog Report: There are currently NO lost dogs in Wanakena. No lost dogs, but there is a new dog in town. His name is Benji and he’s 11 weeks old. If you see him out for walks you’re more likely to see him in his owners arms, as he’s still too little to walk around town… awwww, Benji! 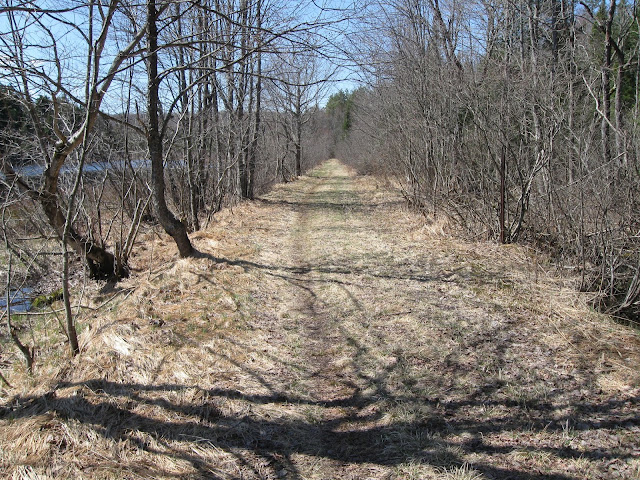