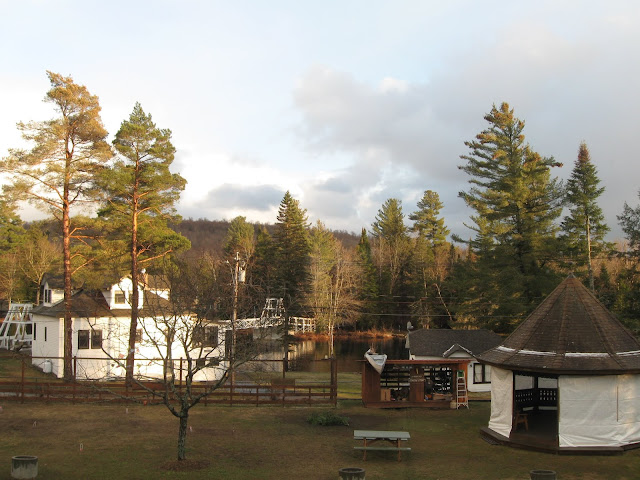 In an effort to “FLATTEN THE CURVE” Otto’s Abode will remain closed until further notice. This is our fifth week of being closed. Five weeks is a long time. Also, on the flip side - it's not. Maybe five weeks being a long time is a good thing. Maybe it's bad. And the reverse: Five weeks not being that long has its positives as well as its negatives. But, that's like most things - two faced - like a coin. A light side and a dark side. That's life, right? That being said: we do very much miss being open for business. Hearing footsteps coming up the porch stairs, turning left to get the mail. Coins jingle-jangle in the newspaper machine. Maybe someone has to wrestle with it. Hopefully they win and get their paper. Footsteps might come across the front porch. Maybe duck their head down to see whos in there? Tiny bell attached to front door jingling overhead. Music playing on the stereo. The smell of coffee. The taste of coffee over chitter-chatter with a friend, neighbor or stranger. New art exhibits. The once-new art exhibit getting old. A new one popping up on the white wall overnight. Hopefully it will be back that way someday. We'll be here when it does. Can't wait. Till then.. It's only been five week!!! Woohoo! 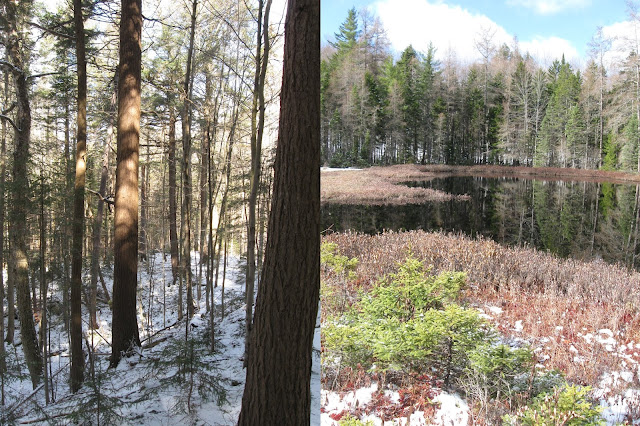 Overall, this week has been cold, wet and snow flurry-ish with a BIG burst of wind swooshing over the region. Last Thursday Wanakena woke up to a steadily raining wet morning with temperatures in the low 40s. Friday we saw a thin coating of snow. With temperatures in the low 30s the snow didn’t have much trouble sticking to things such as tree branches, picnic tables, etc. Although by late afternoon the sun had poked out and the not-cold-enough ground and sun melted much of it away. The weather seemed to have brought some sort of red-capped sparrows to the feeder that weren’t around in weeks prior. Saturday was a cold day in the 30s, snow flurries one moment and bright sun the next. A quiet, overcast Easter Sunday in Wanakena. Monday brought rain and wind! Very windy! Lights flickering windy. After a cold-ish weekend when the temp got up above 40 it felt downright warm outside. Tuesday brought more snow flurries and temperatures got down into the 20s at night. Wednesday Wanakena woke up to snow accumulation, again! Enough to bring the plow into town this time. Though, the plow was more focused on sanding/salting the roads not so much plowing snow. This weekend’s forecast looks to be much like this past week with daytime temps around 30 or 40 and getting down into the 20s at night. The already downed-tree covered foot trails in the region most likely received a peppering of even more downed trees/limbs/branches after that windy weather phenomenon. Besides that, the trails should be relatively dry and snow pack-less. The local mergansers don’t mind: 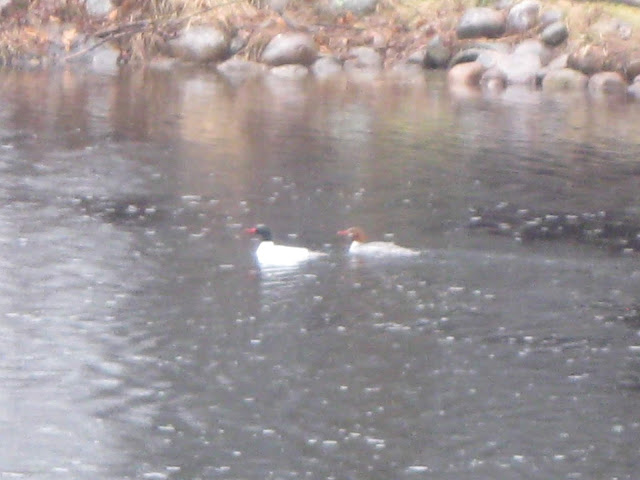 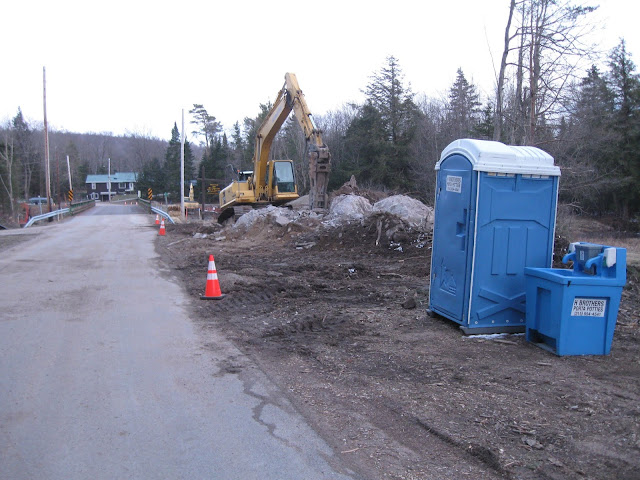 On the south side of the river a large rectangular shaped hole as been dug. It could possibly be where a footer of some sort will be built – something to fasten the temporary bridge to. It seems once the footers are in place, it wont take much to plop the temporary bridge down and grade-out temporary road leading onto it at either side. Cars should be driving over the temporary bridge in no time. And then the old green steel deck bridge faces the same fate as boulders-in-the-way: got to go. 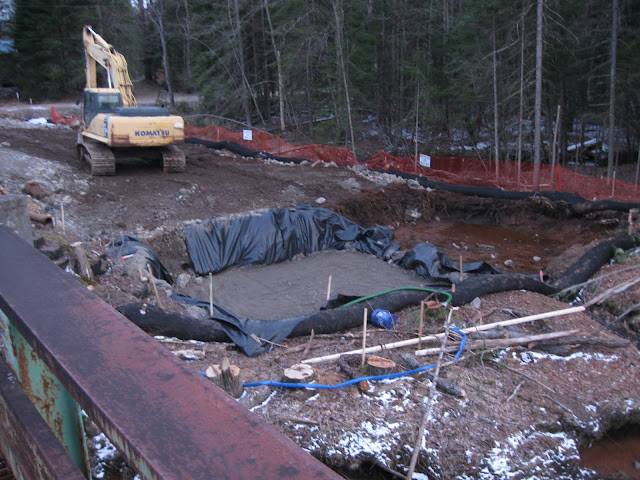 Poking around the internet we stumbled upon a story featured in the Glens Falls Post Star about the Ranger School. Since the article is pretty short we’ll feature it here (link to article below)

On Friday, April 17, Alex Hohman, 21, of Queensbury, will become one of the very few college students in the country to graduate this spring in an on-campus ceremony. Hohman attends the SUNY College of Environmental Science and Forestry in Wanakena, on the western edge of the Adirondack Park, about half an hour west of Tupper Lake. Since mid-March, he and his 51 classmates have been restricted to campus, along with the teachers and staff, but have continued classes on an accelerated schedule. Spring break was canceled, Saturday classes were added and graduation was moved up by four weeks. Reached by phone on Friday, Hohman had just emerged from a final exam, which went well, he said, despite the rushed spring schedule and “a lot of cramming.” Almost all other colleges nationwide, including other SUNY schools, sent students home in the face of the pandemic and have not recalled them. Hundreds of thousands of students have been attending classes online. But at least half of Hohman’s coursework entails fieldwork such as “timber cruising” — taking inventory of trees in the forest; trail and road maintenance; and logging. None of that can be done online. Hohman is enrolled in a one-year forest tech program in which students attend classes in the morning and go into the field in the afternoon. He will graduate with an associate in applied science degree and has already taken the state Civil Service exam for the job — forest ranger — he wants to pursue. The college allows students to get their general education credits somewhere else, which Hohman did at SUNY Adirondack, then take the intensive single-year program in Wanakena. The school’s small population of students and staff and its isolation in the Adirondack wilderness have allowed it to self-quarantine successfully from the COVID-19 outbreak sweeping the country. No one has been allowed to leave or visit campus since mid-March, and deliveries of food and other supplies are dropped off outside, then collected by staff. Not leaving campus hasn’t been a great hardship or even much of a change, Hohman said. The campus includes 2,800 acres of woods that borders on the 5 Ponds Wilderness Area, and students can still go exploring and camping. “No one’s sick,” he said.

“ADK puts Northville-Placid Trail Challenge on hold”. In line with Governor Cuomo’s directive for New York State to PAUSE amidst the COVID19 pandemic and Adirondack Mountain Club Executive Director Michael Barrett’s urging to”hike locally and individually,” the Northville Placid Trail Challenge is suspended until further notice. This action was taken by the ADK Schenectady Chapter, which manages the challenge. While the trail remains open, any hikes completed after April 12 until further notice will not be recognized as counting towards the completion of the challenge.

According to an announcement from the Rev. Dustin G. Wright, chair of ADK’s Schenectady Chapter, the decision aligns with the recent ADK Glens Falls/ Saratoga Chapter move to suspend its Fire Tower Challenge. Wright cites that chapter’s recent new releases: “Where we decide to go outside matters. The population of New York over 65 years old is 16.4% of the overall population. Note the much higher percentage of the following counties where we enjoy being outdoors: Hamilton:31.3%; Essex: 23.4%; Warren: 22.2%. This matters because COVID-19 is particularly lethal to those 65+ years old. When you consider where to recreate, please stay as local as you can. We must keep northern New York as free of COVID-19 as we can.”

One wonders if the Cranberry Lake 50 Challenge will follow suit. Suppose we’ll wait and see on the Cranberry Lake 50 Facebook Page – which has seemed to become the main source for CL50 information from the Five Ponds Partners on the internet. Back before the internet places like The Wanakena General Store could have been one of the more dependable boots-on-the-ground places to call and found out local trail and weather conditions. Don't forget your local businesses! Give them a call (or email) - they'd probably love to hear from you! Even if they cant help you out as well as a bunch of folks on the internet can.

Blackwaters Café in Wanakena, UB’s Mercantile in Oswegatchie, Adirondack Pharmacy in Star Lake, Mountain Gate Redemption near Benson Mines and Stone Manor Diner in Cranberry Lake remain open for business in one way or another (take out, pick up, drop off, etc…).

Everyday since the Covid-19 crisis became a regional reality, North Country Public Radio (WSLU) has been updating their website daily with news, information, etc all pertaining to Covid-19. Everyday the blog post features a headline photograph. The photographs have picked up the habit of featuring signs. For example: a photograph of a handwritten sign taped to a storefront’s door, or a photograph of children's drawings and messages taped to the inside of a home’s front window, or a big message sign outside of a church. This past Monday the blog photo of the day looked pretty familiar: 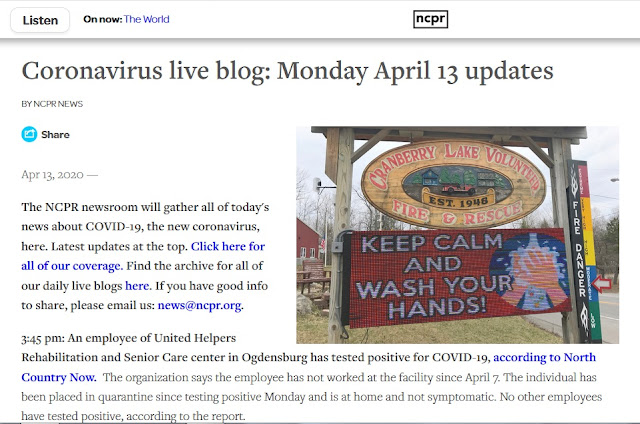 Strolling around Wanakena you’ll see gnomes and coyotes heeding to the “stay at home, wear a mask, etc…” news of the day. 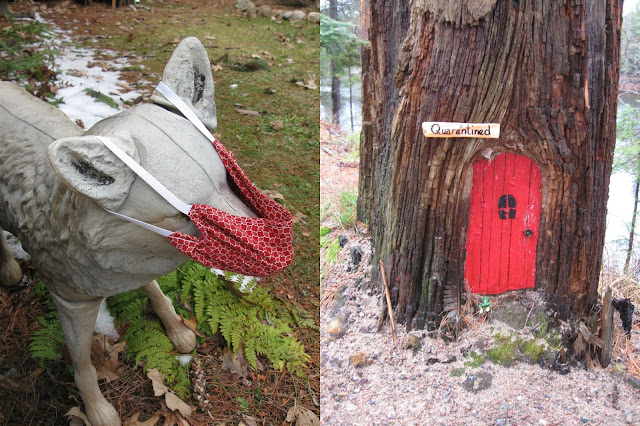 Kim’s Lost Dog Report: There are currently NO lost dogs in Wanakena. Although, a coyote wearing a face mask and hanging around town might be considered lost to some. Some might argue: not lost, just found a new home here in the village during a global pandemic. Not lost, out of place? Conducting research? Banished?

A State of Emergency has been declared in St. Lawrence County effective Monday, March 16, 2020 through April 14, 2020 in conjunction with Coronavirus/Covid19. 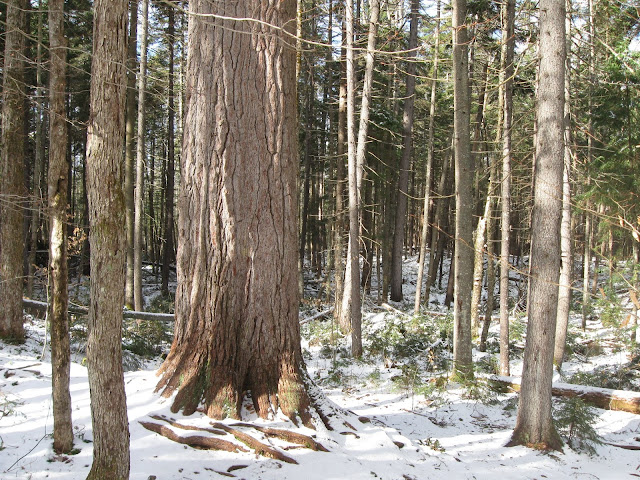