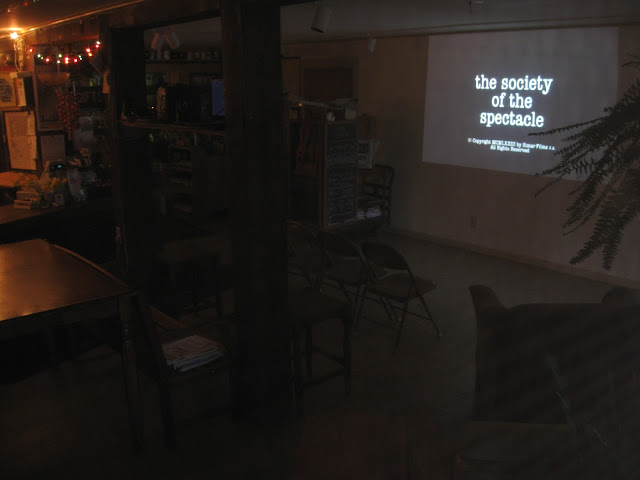 La Société du Spectacle (Society of the Spectacle) is a black and white 1973 film by the Situationist Guy Debord based on his 1967 book of the same title. It was Debord's first feature-length film. It uses found footage and detournement in a radical criticism of mass marketing and its role in the alienation of modern society. (ubuweb)

The 88 minute film took a year to make and incorporates footage from feature films, industrial films, news footage, advertisements, and still photographs.[1] The films include The Battleship Potemkin, October, Chapaev, The New Babylon, The Shanghai Gesture, For Whom the Bell Tolls, Rio Grande, They Died with Their Boots On, Johnny Guitar, and Mr. Arkadin, as well as other Soviet films.

Events such as the murder of Lee Harvey Oswald (who assassinated U.S. President John F. Kennedy in 1963), the Spanish Civil War of 1936-1939, the 1956 Hungarian Revolution and the Paris riots in May 1968 are represented, and people such as Mao Zedong, Richard Nixon and the Spanish anarchist Durruti.

Throughout the movie, there is both a voiceover (of Debord) and inter-titles from The Society of the Spectacle but also texts from the 1968 Occupation Committee of the Sorbonne, Machiavelli, Marx, Tocqueville, Émile Pouget, and Soloviev. Without citations, these quotes are hard to decipher, especially with the subtitles (which exist even in the French version) but that is part of Debord's goal "to problematize reception" (Greil and Sanborn) and force the viewer to be active. In addition, the words of some of the authors are detourned through deliberate misquoting.

In 1984, Debord withdrew his films from circulation because of the negative press and the assassination of his friend and patron Gerard Lebovici. Since Debord's suicide in 1994, Debord's wife Alice Becker-Ho has been promoting Debord's film. A DVD box set titled Guy Debord: Oeuvres cinématographiques complètes came out in 2005 and contains Debord's seven films.

The cover of the film is derived from a photo of Life magazine photographer J. R. Eyerman.

Life magazine used one of the photos as the cover of a brochure about the 1946-1955 decade. The photo employed by Debord shows the audience in "a virtually trance-like state of absorption, their faces grim, their lips pursed;" however, in the one chosen by Life, "the spectators are laughing, their expressions of hilarity conveying the pleasure of an uproarious, active spectatorship."Debord version is also flipped left to right, and cropped. (ubuweb)